This ride is a lot of fun, especially if you like to take pictures. The arial cable car travels safely between two different points of the Canadian shore of the Niagara River over the spectacular Whirlpool.

When you get to the other side, the attendent will ask all the passengers to cross to the other side of the car and face in the opposite direction on the way back. Click, click, went my camera. 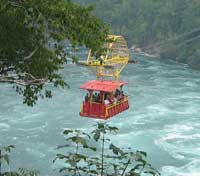 The ride is very safe, and the photographer in me had to decide whether to take a picture of the 260ft high banks of the gorge, or the turbulent water below. 1/3 of the drainage of the North American continent passes through this area, 2,200ft across at the Falls. That's a lot of water.

Over time, the eroding power of the mighty Niagara river has cut a basin some 900ft in diameter and 180ft deep where the surging river turns back upon itself.

The swirling water can trap any floating object for days, grinding huge logs into pulp.

Fun Facts: The Whirlpool Aero Car is located 3 miles (4.5km) north of the falls. It was designed by a Spanish engineer Leonado Terres Quevedo, and has been operating since 1916. A round trip travels about 1 km (3,600ft) and takes about 10 minutes Torres-Quevendo's Spanish Whirlpool Aero Car runs between two terminals, which are about 1,770ft apart and 210ft above the water. The car, built in Bilboa, Spain held 40 passengers, and cost $US 120,000 has been operating since 1916. 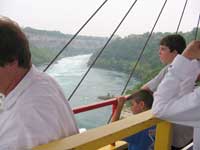 The Aerocar runs entirely within Canada but crosses a corner of the New York state border at midpoint. Permission was needed from national authorities in Ottawa and Washington D.C. as well as New York state.

Whirlpool Aero Car Specifications: The system is a single-reversable aerial tramway with six track ropes, and one haul cable propelled by a continuous line rope. The track cables at Thompson Point(opposite side) are attached to a 120 ton counterweight that adjusts up and down, compensating for the load as the car moves along the cables.

The maximum speed of the car is 500ft per minute, however, with half speed over the most spectacular portion and docking deceleration, the roundtrip on the Whirlpool Aerocar takes about 10 minutes.

Schedule: Our seasonal operation depends on wind and weather conditions- The last tickets are sold 30 minutes before listed closing times.