The actual Niagara Water Falls form part of the border between Canada and the US. They can be viewed from both sides.

There are three actual falls which are . . .

-Canadian or Horseshoe Falls (between Goat Island and Table Rock) 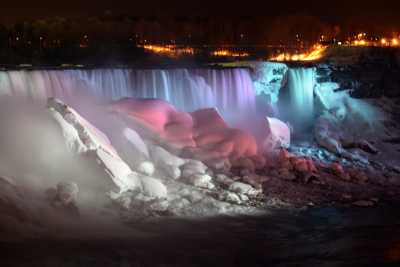 They are spectacularly lit at night with multi-coloured lights shining from the Canadian side.

These Niagara Water Falls have undergone a dramatic facelift due to erosion. Geologists predict these Falls will transform into a succession of descending rapids.

The Bridal Veil Falls was named for its appearance and is located next to the American Falls, separated by Luna Island.

Brief History
The Niagara River is approx. 12,000 years old. The Niagara Escarpment is much older. The glaciers pushing down on the land laid layers of sediment. The erosion process of ice and water ate at the escarpment.

The cliffs the Horseshoe Falls flow over have a hard top layer of dolomite limestone with softer layers of sandstone and shale below.

It is the second highest falls on the planet after the Victoria Falls in South Africa.

1/5 of the world's fresh water is found in Lakes Michigan, Huron, Superior and Erie. Their combined volume flows down the Niagara River cascading over the Niagara water Falls (or diverted for creating Hydro Electric Power.) Then it flows 15 miles through the Niagara Gorge to empty into Lake Ontario.

There is a spectacular drop equal to a 20 story building between Lake Erie and Lake Ontario. It is known at the Niagara Escarpment.

The obstacle named Goat Island (after John Stedman's goats froze to death there in the winter of 1786) caused the Niagara River channel to split into two; the eastern side being the American Falls, the western portion is the Horseshoe Falls where the river angles some 90 degrees.

Modern Engineers have tried to control the flow of water over the Niagara Water Falls. The water today is fed though underground pipes to hydro electric power stations.

The Niagara Water Falls themselves, because of the tremendous volume of water flowing over them, do not freeze over in winter. However, the falling water and constant mist create ice formations along the banks of the river and Falls. It results in mounds of ice as thick as fifty feet at the base of the Falls forming an 'ice bridge'. It can extend miles downriver to the area known as the lower rapids.

As late as 1912, visitors were allowed to walk out onto the ice bridge to view the Niagara Water Falls.

Many 'mini-ice bergs' flow downriver from Lake Erie but have been greatly reduced by the yearly installation of an ice boom. It is a 3.2 km (2 mile) floating chain of steel floats strung across the Niagara River between Buffalo, NY and Fort Erie, Ont. It is set in place in December, by the New York State Power Authority and removed in April or May. The boom prevents ice from clogging the river and the hydro electric companies water intakes.

Only once in 1848 did the water stop completely over both Falls for several hours. This was due to an ice jam in the upper river. The Falls didn't actually freeze over. The flow trickled to the point where people actually walked out and recovered artifacts from the riverbed.

In 1969 the US Army Corps of Engineers completely stopped the flow over the American Falls for several months. They were trying to decide whether they could remove the large amount of loose rock at the falls base. It would enhance it's appearance. In the end the expense was determined to be too great.

The first to go over and survive was a 63 year old female school teacher. High wire tightrope acts used to be performed across the river.

You will not soon forget the roar of this might wonder of the world and its dampening mists.

There is designated parking right across from the Niagara Water Falls with a special area for disabled visitors and for vans and vehicles with ramps.

Common sense tip: Parking is much easier off season and during the week, compared to weekends in the summer.

Links to other pages