Niagara Falls Illumination first took place 144 years ago,. The Falls was first lit in honor of the Prince of Wales. Now the Falls are lit nightly to 10 pm January to April and until midnight the rest of the year.

During the Royal Visit of 1860 by the Prince of Wales, night lighting of the falls was first attempted.

200 colored and white calcium , volcanic and turpedo lights were placed above and below the banks of the American Falls. Along the road down the banks of the Canadian side of the forge and . . . behind the water of the Horseshoe Falls.

The light were called Bengal Lights, the kind used by ships at sea to give warning or send a SOS signals. The burning lights along with rockets, spinning wheels and other fireworks were so imprssive that the London Times reported it as "grand, magical, and brilliant beyond all power of words to portray the likes of which the Prince would 'probably never see again' " - London Times 1860

First Electrical Illumination took place in Jan 1879 and had the effect of 32,000 candles.

"On the evening of the Forth, the Park was crowded with visitors and citizens and a very satisfactory exhibition of the new light was given" - Niagara Falls, New York Gazette July 1879. The lights lasted for only one season.

In 1892, the original owner of the 'Maid of the Mist'. Frank LeBland placed a 4,000 candlepower light on the Canadian Maid of the Mist dock. It lite up the American Falls. Colored Gelatin Plates were placed in front of the lights providing a variety of colors.

In 1895, the Great Gorge Railway provided 3 nightly trips a week during the summer. There were lights to illuminate the Whirlpool.

"Forty arc lamps of 2,000 candlepower each will be placed in the gorge along a distance of 250 feet. lights will be clustered and so many in such a short distance will make the gorge as light as day. Each arc light will be filled with three globes, white, red and blue, and will work automatically alternating colors. A huge searchlight will also operate from the cars" - NFNY Gazette.

In 1901, there was a special lighting set up as part of the Pan American Exposition being held in Buffalo, NY.

In 1907, 36 projectors with a combined candlepower of 1,115,000 designed by D'Arcy Ryan of General Electric Co. illuminated the Falls, but only for several weeks. 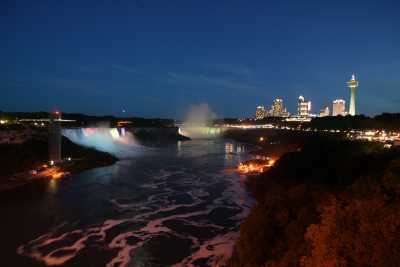 n 1925, the Niagara Falls Illumination Board was created to finance, operate, and maintain a proper lighting system. Today's members are the Cities of Niagara Falls,, New York State Office of Parks, Recreation and Historical Preservation, Ontario Power Generation and the Niagara Parks Commission.

Niagara Falls Illumination in 1925 consisted of 24 carbon searchlights, 26 inches in diameter projecting a total of 1,320,000,000 candlepower.

Conservation measures during World War II darkened the Falls. So did the subsequent construction boom as the generating facilities could not keep up with the growing electrical demand.

The Illumination board wasn't able to guarantee enough power to operate the lights regularily until 1950.

In 1997-1998 new fixtures were installed at the Illumination Tower; doubling the light's intensity without doubling the hydro bills. -New 21 Xenon lights, with a 76 cm (30" inch) diameter are used to illuminate the Falls with a rainbow of colors. 18 lights are found at the Illumination Tower while 3 are located below the street level in the gorge opposite the American Falls. Each Xenon light produces over 390 million peak beam and has the effect of 25 million candles. Wow!


Link back to home page.